You get several benefits if you use the English version of Photoshop. Here we go through the benefits and show you how to change languages.

If you do not have the right language skills, it is good that Photoshop is available in Swedish, but if you understand English without major problems, it can be an advantage to use Photoshop in the original language. At the editorial office, several of us prefer to use Photoshop in English, and there are several reasons for this. If you search for a particular feature of the program online, you have a much better chance of finding explanations in English. And it’s easier to follow in an English video where menus and functions are named the same as in your version of the program.

Many of the keyboard shortcuts in the program are also linked to the English designations. The shortcut to Crop Tool is C, and the shortcut to Levels is Ctrl + L. In Swedish it is the same shortcut, but the functions are called Crop Tools and Levels. In addition, there are some failed translations in the program.

How to switch to English in Photoshop

If you subscribe to Photoshop through Adobe’s Creative Cloud, you can change the language. By default, Photoshop is installed in the same language as the operating system. If you have a Swedish version of Windows, Photoshop will be installed in Swedish. 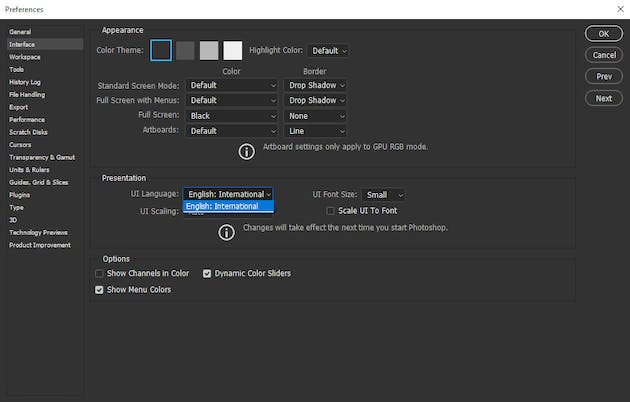 You can not change languages directly in Photoshop. You have to go through Creative Cloud, where you make some settings, and then you uninstall the Swedish version and install the English version. To make account settings, open the Creative Cloud app on your computer. Then select the icon at the top right that looks like a cake chart or has your own picture. Click Settings and select Applications on the left. For example, select English (International) in the Default installation language and click Done.

Now you need to uninstall the Swedish version. If you have feature macros in Photoshop, you can copy them first for safety. In the Creative Cloud app, select All Applications on the left. Click the three dots next to Photoshop and select Uninstall. Now Creative Cloud asks if you want to keep settings, plug-ins and more. Select Keep to keep the settings. Now it’s time to install the English version of Photoshop. Under All programs in Creative Cloud, look for Photohop under Included in the plan. Click Install to get the English version.